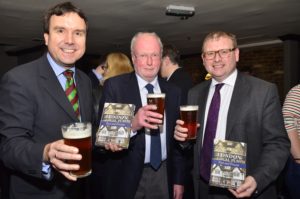 THE National Brewery Heritage Trust (NBHT) has completed its first major project, the digitisation of thousands of historic pub photos, some of which date back to the 1900s.

The project was launched at an event at the Magpie and Stump pub in London EC4, one of the pubs which features in the collection in the presence of NBHT trustees Chairman Harry White and Burton MP Andrew Griffiths and Community Pubs Minister Marcus Jones.

And now some of the photos can be found in London Local Pubs: Past and Present, a new book written by Adrian Tierney-Jones, and published by Halsgrove Publishing which contains “then and now” images from 52 pubs in the London area.

To complete the project the NBHT, worked with Historypin and Heritage Assets to digitise more than 3,000 photos, which had been housed at the National Brewery Centre museum in Burton after being rescued in the 1980s from a skip at Charrington’s brewery in London by NBHT trustee Robert Humphreys.

NBHT Chairman Harry White said: “This stunning collection was within moments of being lost forever and it is fantastic that they could be stored at the National Brewing Centre for so many years. Now, at last, the collection is available online to all of us, thanks to the combined efforts of those involved. I could not be more delighted.

“This project is a fantastic example of the work the Trust is doing to protect, preserve and make available the collection of objects and artefacts of brewing at the National Brewery Centre.”

He said: “I’d encourage both Londoners and visitors to the capital to use this great new resource to get together and find some hidden gems.

“It clearly shows British pubs have always been at the heart of their communities. And that’s why we are determined to protect their future.

“From giving local people a fairer chance to retain their coveted pubs to cutting beer duty to help landlords – we’ve not done things by half and I am certain that with these measures the great British Pub will stay where it belongs, at the centre of our nation’s communities.”

To find out more about London Local Pubs: Past and Present and to explore the online archive, visit www.londonlocalpubs.com