Historic 19th century Worthington portraits will soon be on display 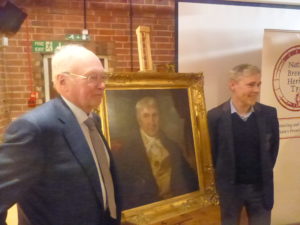 After much hard work and a couple of setbacks two historic paintings with links to the early days of brewing in Burton will go on display at the National Brewery Centre (NBC) early next year.

Earlier this year NBHT began the task of raising the money to restore the portraits of William and Martha Worthington, members of the famous Burton brewing family.

The 19th century portraits were bought for £500 including fees at an auction in Clevedon near Bristol.

NBHT Chairman Harry White said: “The Evans and the Worthington families were key players not only at the time of Burton’s Baltic trade (the late 18th century) but also during the development of the town as the brewing capital of the world in Victorian times and it is only fitting that the portraits will now have a permanent home in Burton.”

And if William hadn’t invited the artist to his house to paint a picture of his greyhounds they might never have been painted. Apparently, on meeting Jones the couple were moved to sit for their portraits. It appears the portraits were lost for many years before being rediscovered at a house in Bristol.

Both the portraits are 75cm by 62cm in size.