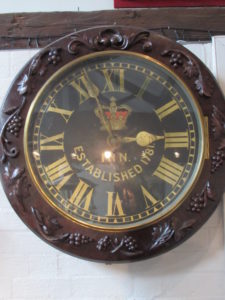 This clock was originally housed in The Crown Inn which is a public house in Broad Street, Birmingham, England, (current building also pictured below). Built in 1781, it was rebuilt in 1883, 1930 and 1991. It is Grade II listed. It was the brewery tap for William Butler’s brewery, which Victorian building survived at the rear of The Crown until 1987. 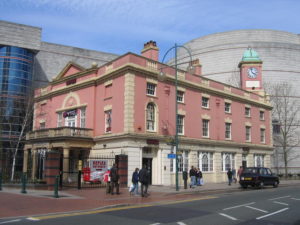 It sits alongside a Birmingham Navigation canal. and is nestled within the outline of the International Convention Centre. The sash windows on the first and second floors are from the 1781 building. The architect for the 1883 work was William Jenkins, for the 1930 work, E F Reynolds, and in Alan Goodwin & Associates, who added a west façade described by the architectural critic Andy Foster as “cheap”.