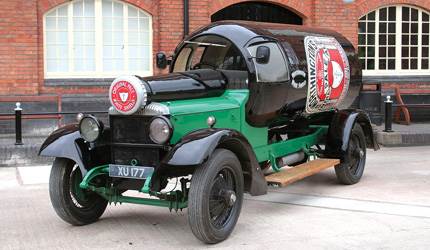 Originally built in 1923.The Daimler Bottle Car was one of five purchased by Worthington’s Brewery in the early 1920s. They were used throughout the 1920s and 1930s, mainly in towns for promotional purposes. After the merger of Bass and Worthington, in 1927, at least two were re-liveried in the Bass livery.

During World War II the bottle cars were laid up, but re-emerged afterwards fitted with new Bedford engines and continued to work for the company until they were sold in 1957/58; when they were replaced by two large Seddon motor bottles.