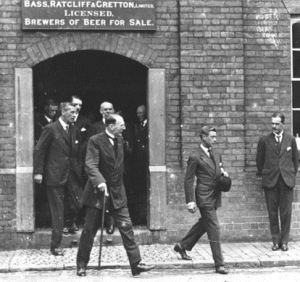 1929 – Prince Edward VIII and party pictured leaving a Bass building in No. 2 Brewery, following a tour with Colonel John Gretton during which he started the mashing process for the brewing of Prince’s Ale.

The Prince of Wales, Edward, later to become Edward VIII, abdicated before his coronation could take place. This was the second Bass beer to have royal connections, King’s Ale being the first.

The beer was bottled within a year of brewing, and was launched on the open market. It was sold at £5.00 a bottle throughout the UK, and was also made available in other parts of the world. There is little doubt that it was an excellent beer, although perhaps not of the calibre of Ratcliff Ale or King’s Ale, because it did not sell well. Perhaps it was the price that put people off. £5 was a lot of money in those days. It was still available at the close of World War II.